Today Victoria, my sister, was here. We had been unsure how to get her to come over to talk about things, without making her worry unnecessarily. Fortunately she offered to come today, and so we had a conversation. Mum asked her to come into me to talk and Vic asked if it was bad – mum said not horrendous, but it’s not great. Vic composed herself for a few minutes and then came in.

I explained where we’re at with the infections — if we can’t find an underlying cause that we can treat, and if we can’t find a way to control the infections, then I won’t live a long time. However, we had not ruled out underlying causes that we may be able to treat, and so we’re not “at the end” just yet. I explained about the nurses coming round, the palliative care consultant, Dr Tosh’s visit, and the plan we have moving forwards. Dr Tosh will speak with all my team, get hold of scans and results, decide on a plan and a range of tests he wants to do, admit me to the hospice and then do a full review and organise any tests with Southend Hospital. We have to prepare for the worst, but hope for the best – which is what Victoria also said just before leaving.

Telling my sister all of this, she took it better than I thought. She also reiterated what mum and I also say; I have survived so many times against the odds that, although we’ve known of my death and professionals have prepared us for this, it almost doesn’t seem real — we’ve become complacent where I have survived so, so many times against the odds. Mum and I have had many conversations over the years about my lack of survival, and on top of this, mum has also experienced approximately a dozen conversations on her own about my slim chance of survival when I’ve been too poorly to even be part of the conversation. It’s not unknown. But this time, our visions of me coming through and bouncing back are not visions of what will happen. I very well may die, but even if I survive, I won’t ‘bounce back’ and my life won’t go back to how it was pre-September when this rapid progression and these uncontrollable infections started. I might regain more quality – please god – and hopefully we can do something to give me more time, but life is going to be different now, whatever happens. I have to accept this, as does mum, as does Victoria. Victoria did say “we’ll get through this, together” and that is exactly what we’ll do. I am so lucky to have such a wonderful family, I really am. Victoria and I have had our differences over the years, we’ve fallen out and come back together (let’s face it — what sister’s haven’t!), but in recent years we’ve been a really close unit and despite all we go through, we get through it together.

Having “difficult conversations” should not be avoided. I was terrified something would happen to me and Victoria would be angry and upset that we hadn’t been honest with her and she wasn’t able to be prepared. I needed Vic to know, to be on the same page. Now I can rest easy knowing she’s aware of everything and once again, the three Watts girls can come through this together. And with MollyDog, of course. El la cuatro las chicas. [Yes, I did just get that off google translate! It just sounded nicer than the four girls does in English!].

2 thoughts on “Difficult Conversation with my Sister”

Lucy Watts MBE invites you to come with her on her journey through life – and end of life. Inspired by the late, great Kate Granger, she wants to give an honest look on life with a life-limiting illness and facing your own mortality, as well as experiencing end of life. So few people share an honest narrative and do not share the difficult side of experiences of illness in a way that is relatable and educational; Lucy wants to give people an experience of travelling this journey with her: through life and – when it comes – end of life. This isn’t a morbid blog. It’s about finding the silver linings, celebrating what is, cherishing those who are dear, finding and sharing the humour and laughing through life, and being brutally honest about life – including the highlights and the s*** bits. It’s life, in all its glory.

It’s a candid blog full of life, laughter, love and loss.  Lucy wants to inspire people to live their life to the fullest, make the most of every day and to focus on all they do have, and motivate them to think about and plan for the only guarantee in life — death (as, in case anyone hasn’t noticed, life has a terminal prognosis) and to ensure their wishes are documented and all necessary paperwork is completed as soon as possible (aka, get your s*** in order!).

This is not a death blog – it’s a narrative of life, death and everything in between. A story of a life well lived. 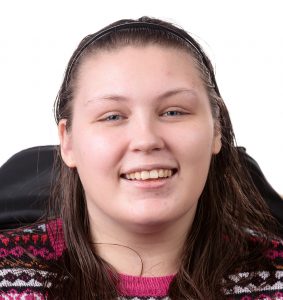 Lucy Watts MBE is a prominent patient leader, disability activist, palliative care advocate, consultant, trainer, speaker and entrepreneur. She has a progressive life-limiting condition and extremely complex medical needs and has been living with the knowledge that she will have a short life since her mid teens; she has far exceeded her original prognosis.

Lucy wants to share her journey through life in a more candid and relaxed way. Lucy has truly lived an incredible life, and has far exceeded all expectations – both in terms of survival, and in terms of what she can achieve. However, Lucy’s illness is changing and at some point, she will reach the end of her life. When that’ll be, no one knows. A comment on a group about Lucy being able to voice something so many others cannot, inspired her to start this new blog. She hopes people can learn from, be inspired by and gain through her sharing her experience.

12th-19th February – a week of conversations